A family from Bangor, County Down, Northern Ireland, have said their pet dog is a hero after saving the life of their five-year-old son, after he became trapped in a tumble dryer. Riley Gedge-Duffy suffered burns to his arms, back and head when the machine automatically started with the boy, who has Down's syndrome, got stuck inside. Aaron Duffy said his wife was vacuuming when the incident happened on Sunday. 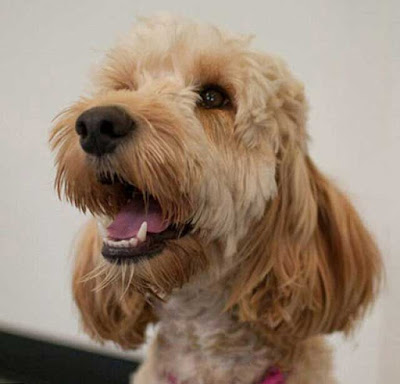 He said she only knew something was wrong when their dog, Teddy, a cockapoo, began to bark. "Only for our dog going nuts and notifying my wife by running up and down barking, my wife knew that there was something up and went down," Mr Duffy said "She literally just pulled him out, it didn't matter if it was head first, feet first, legs whatever, he was coming out. So we got him out and literally cooled him down. 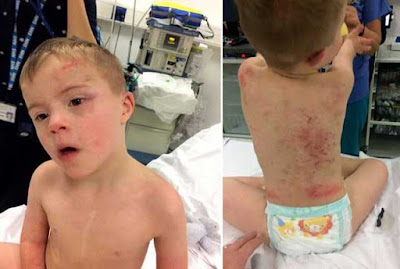 "Teddy's going to get fillet steak tonight, I can guarantee that, she's a very smart dog." Riley was rushed to the Ulster Hospital, Dundonald, and is currently receiving treatment. A hospital spokeswoman has described his condition as "comfortable". He suffered burns to his arms, back and head Mr Duffy said that the ambulance driver told him that suffocation would normally take only about five minutes inside such a tumble dryer, even if the machine had not started. 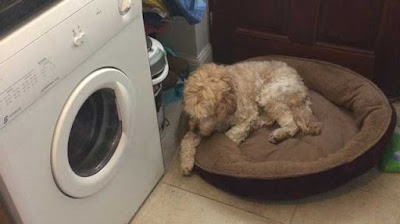 "Riley was born with Down's syndrome, so he's not aware of any danger," he said. "It's just the way Riley is, he tends to take himself off and find a wee corner if he wants to get away from it all. He decided the tumble dryer was where he wanted to go." Mr Duffy said Riley had suffered some burns, but mostly his injuries were bruises from bouncing around the dryer. He said he was to have a CT scan on Tuesday. "If the dog hadn't alerted my wife, had he gone another two minutes, three minutes, more than likely he would have been dead."

With news video.
Posted by arbroath at 6:03 am
Email ThisBlogThis!Share to TwitterShare to Facebook