A koala "on a mission" to visit an accountant in the town of Leongatha, Victoria, was stopped in its tracks by a concerned member of the Australian parliament. 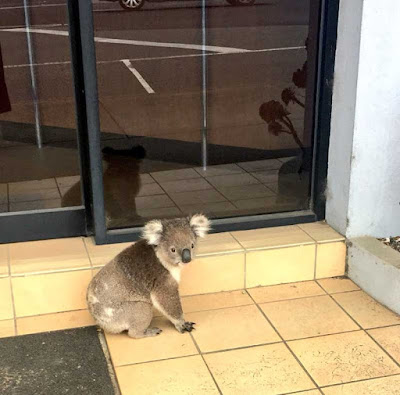 Victorian Labor MP Harriet Shing said she spotted the koala near a main road on Monday afternoon. "No sign of wounds or injuries and very calm, so the only worry I had was that it would get startled or hit by traffic," Ms Shing said.

"S/he seemed to be on a bit of a mission, and wasn't heading towards any of the nearby trees, so I escorted the fuzzy traveller across the road and down the street. Eventually the little champion decided to go into Fawcett and Pickersgill Accountants, where the vet was called for an office visit."

Ms Shing joked that the incident was "just another day" in her electorate. "I'm sure his taxes are entirely in order, but it's important to be thorough," she said. She said the koala "seemed fine" with its ordeal, but that she left its relocation to the experts.
Posted by arbroath at 6:04 am
Email ThisBlogThis!Share to TwitterShare to Facebook