A sword-wielding robber who was chased by a shop worker armed with a plastic fork has been jailed for four years. Arthur Rennie, 20, from Port Glasgow, targeted Cowden's News and Fast Food Shop in Greenock, Scotland. He waved the sword and pushed 23-year-old Julie Crighton and demanded cash. She refused, pushed him back and chased him while clutching the plastic fork.

Rennie was caught when a bag containing the sword and clothing, which had his DNA on them, was found near the shop. Jailing Rennie at the High Court in Glasgow, judge Lady Rae told him: "I appreciate you don't accept the jury's verdict, but the evidence showed that you went into the shop, along with another, with your face covered and with a large sword. That young woman was extremely brave to tackle you and you then ran away." 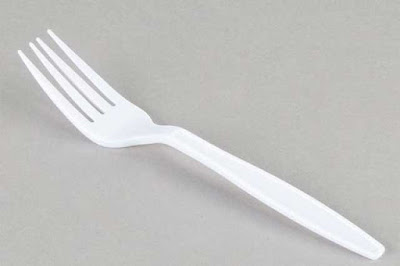 The court heard that Rennie went into the shop, pushed Ms Crighton and repeatedly asked for money while waving the sword about. When she pushed him back, Rennie then fled with Ms Crighton giving chase while clutching a plastic fork. Lady Rae added: "This was a large sword and the incident must have been very frightening. She is an extremely brave young woman that tackled Mr Rennie despite the fact he had that sword."

In evidence Ms Crighton said:: "He was brandishing what I thought was a machete and made his way to the side of the counter. He came towards me and pushed me and I pushed him back. I think he realised I wasn't going to give him anything. He went out and I went out the shop after him. "I wasn't thinking of catching him. Just seeing where he was going." In court Ms Crighton was shown a sword and identified it as the weapon she saw in the shop. Rennie, was convicted, while acting with another, of attempting to rob the shop.
Posted by arbroath at 6:01 am
Email ThisBlogThis!Share to TwitterShare to Facebook

Can't say anything she was angry. bamboo skewer manufacturers once had a similar incident