A woman from Dundee, Scotland, is appealing for witnesses after a would-be thief broke into her car using a mop. Maryanne White, 21, discovered her Lancia Y10 with a mop wedged in its broken passenger-side door. There was nothing stolen inside but the culprit managed to break the steering column of the car and it is now undriveable. It is believed the car was broken into between 4.30pm on Saturday and 10.30pm on Sunday. Maryanne said: “It was a shock and a bit strange.

“It’s been a stressful time and we were really sad and upset – why would someone do that? If anyone has any information about what happened, please call the police. It’s a shame because we were hoping to sell the car. We can’t do that anymore as they have broken the steering column. 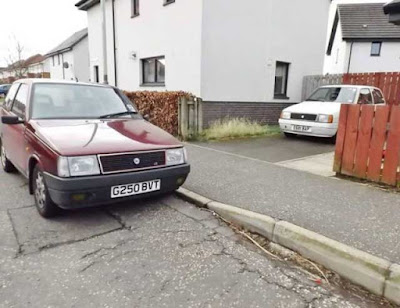 “They actually used a mop to break in. They snapped it in half before using it to prise open the door. I don’t know much about cars but it is undriveable now. Thankfully we’ve got another car we can use.” A Police Scotland spokeswoman said: “Anyone with information that could assist officers with their inquiries is asked to contact us.”
Posted by arbroath at 6:04 am
Email ThisBlogThis!Share to TwitterShare to Facebook